A series of works based on biographies, song lyrics and other texts

What is heavy? so asketh the load-bearing spirit; then kneeleth it down like the camel, and wanteth to be well laden. […]

But in the loneliest wilderness happeneth the second metamorphosis: here the spirit becometh a lion; freedom will it capture, and lordship in its own wilderness. […]

But tell me, my brethren, what the child can do, which even the lion could not do? Why hath the preying lion still to become a child?
Innocence is the child, and forgetfulness, a new beginning, a game, a self-rolling wheel, a first movement, a holy Yea.

One of best known parables of Friedrich Nietzsches "Thus Spoke Zarathustra" describes the the three required metamorphoses of the spirit.
This artworks incorporates these images and basic themes of the book, like the eternal return, development of the mind and freedom.

I see your hair is burnin‘ – Hills are filled with fire
If they say I never loved you – You know they are a liar
Drivin‘ down your freeway – Midnight alleys roam
Cops in cars, The topless bars
Never saw a woman ... So alone, so alone

The lyrics of "L.A Woman" are a love letter from Jim Morrison to the allegoric "Woman" Los Angeles. The artwork is made of historic views of Los Angeles during the sixies, the original handwritings of Jim Morrison and pictures of Pamela Courson

There‘s a place where everyone can be happy. it‘s the most beautiful place in the whole fucking world.
It‘s made of candy canes and planes and bright red choo-choo trains, and you know I wish that I could got there. It‘s a road that I have not found.
And I wish you the best of luck, dear. Drop a card or letter to my side of town. […]

You ... painted my entire world. But I... don‘t have the turpentine to clean what you have soiled. And I won‘t forget it. […]

The 1980 found Band "Bad Religion" is claimed to be one of the most influential Punk-Rock bands of all times. The lyrics of singer and songwriter Greg Graffin are harsh critique on society, religion and double standards.
This artwork includes text passages and images of the song "You" and also incorporates the band logo.

Iwas made to promise to never step on a skateboard again after this contest. I could already feell the panic and depressing soaking in as my spinning slowed and my runwound down. My passion, my desire, my energy – all were growing cold. I knew I‘d already won this contest, but it didn‘t matter anymore. I pulled my arms in as tightly as I could, until I had nothing more to give and after about thirty spins, it was over.[…]

I‘ll give you the bad news first, I think I have to have surgery, so you can call Dr. Feder
tomorrow and set up and appointment. And for the next year I‘d like for you to adress
me by my proper title, „Skater of the Year“, instead of Rodney.

In his autobiography The Mutt Rodney Mullen describes his way to one of the most influential Skaters of all time.
Extents of this biography create the core of the portrait, the background incorporates some of the tricks which are claimed
to be invented by him.

Fotos from the Exhibtion 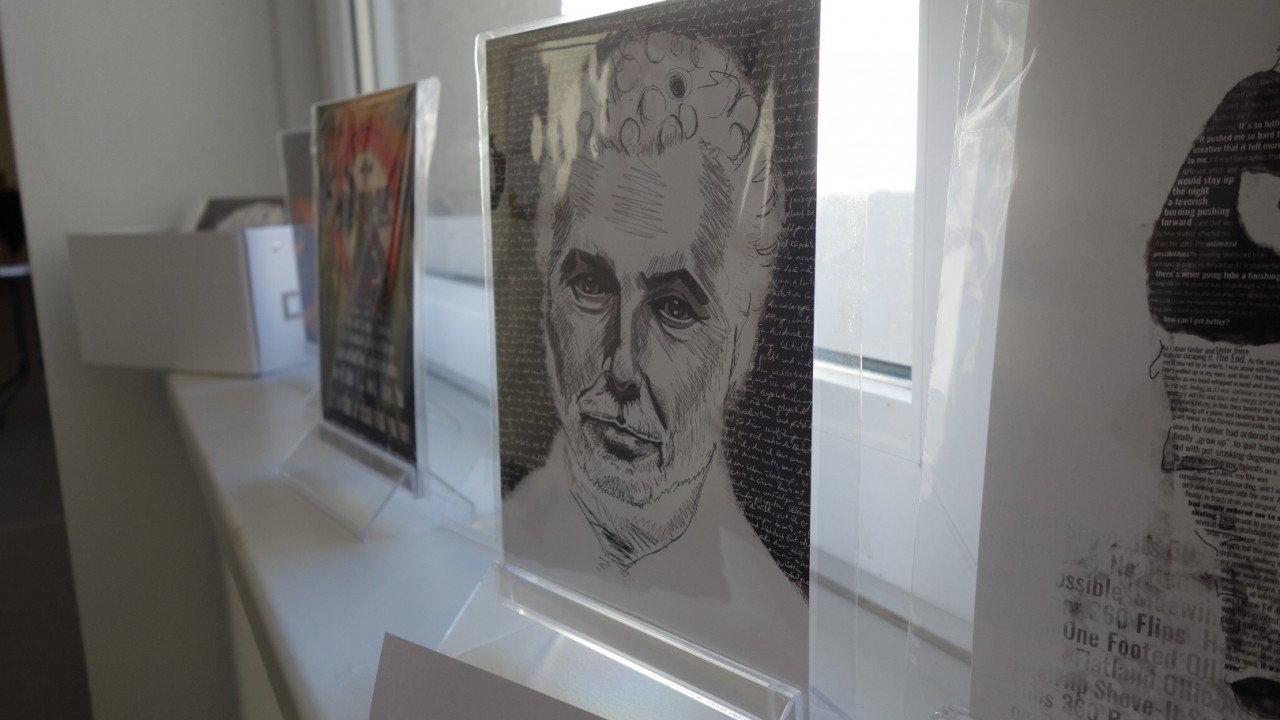 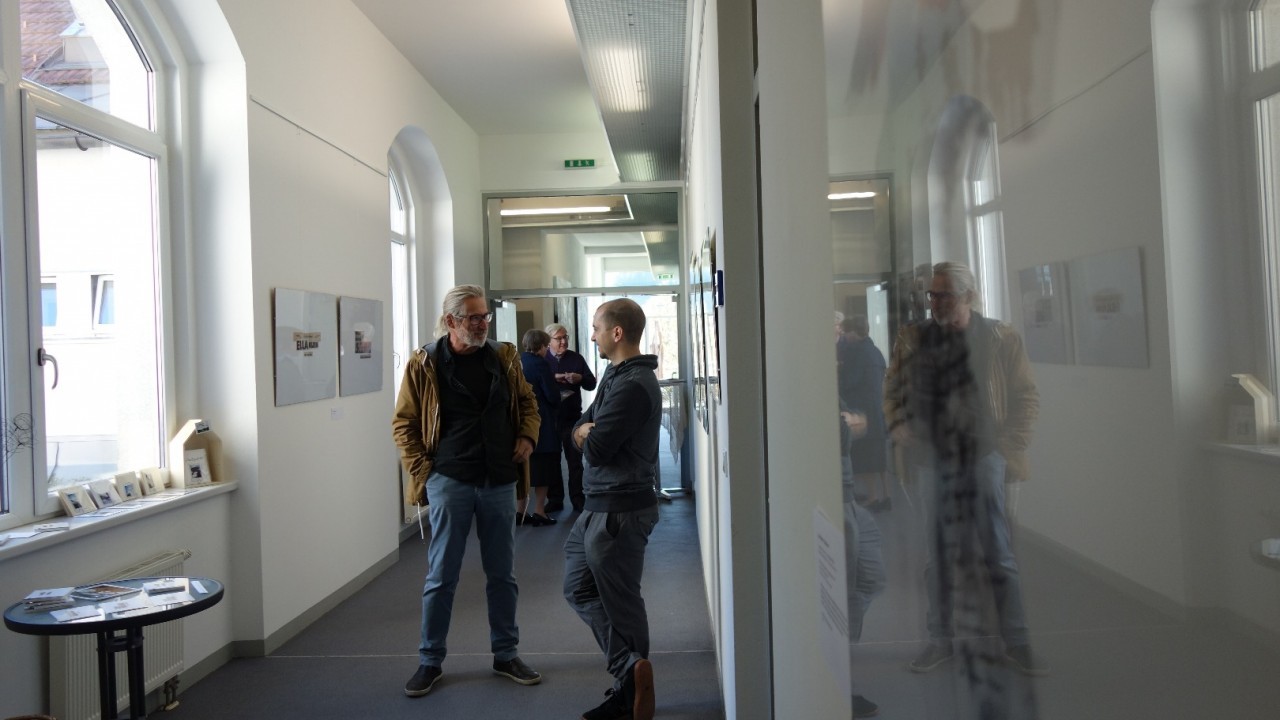 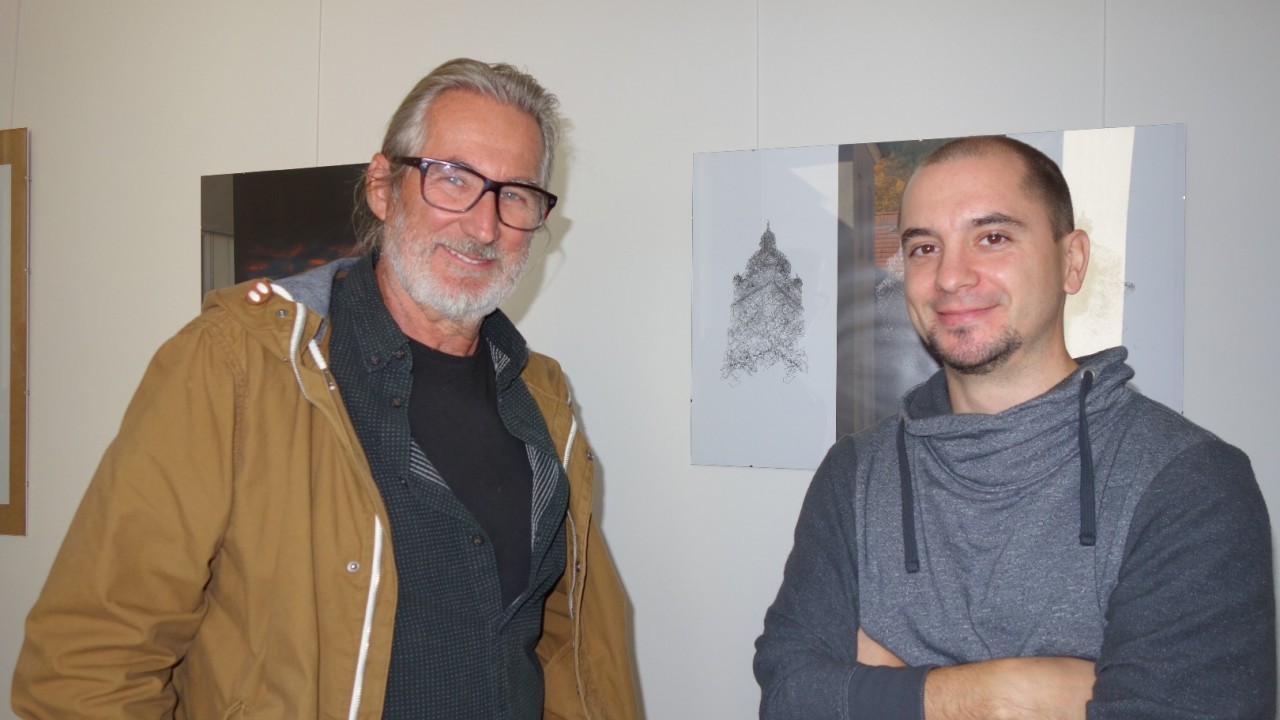